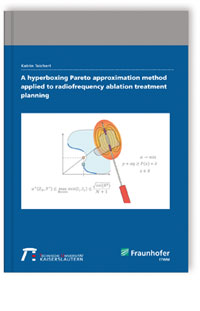 Inhalt
Radiofrequency ablation (RFA) is a procedure to treat tumors of the liver by passing current through a needle shaped applicator placed inside the tumor. The tissue gets heated up and tumor cells are destroyed. Careful planning of the applicator positioning is mandatory for a successful treatment. The desirability of a specific applicator positioning is measured by different criteria, rendering the RFA planning problem a multi-objective optimization problem. In our work we propose a deterministic vector optimization approach to solve the multi-objective RFA treatment planning problem.
To allow for numerical optimization routines, feasibility must be expressed as a set of constraint functions. A difficult-to-treat aspect of feasibility is non-overlapping with critical structures such as organs and bones. We propose a modelling approach where the critical structures are approximated as a set of convex polytopes. Then it is a well-known fact that the non-overlapping condition is equivalent to the existence of a set of separating planes -- each plane separating the applicator from one of the polytopes. In this way we can express the non-overlapping condition as a set of analytical constraint functions.
A vector optimization approach strives to represent or approximate the set of efficient solutions. In this work we develop the adapted hyperboxing algorithm as a specific sandwiching method for the approximation of a non-convex non-dominated set. As in similar approaches, the non-dominated set is enclosed by a set of boxes, whose size is reduced systematically in the course of the algorithm. The adapted hyperboxing algorithm differs from previous methods in the construction of these boxes, which are spanned by the set of all feasible combinations of a so-called inner and an outer knee point. For the bi-criteria case we prove an a-priori upper bound for the approximation quality achieved by this algorithm.
We show with several examples that the developed method can be successfully applied to calculate the non-dominated set of real-data RFA planning problems.