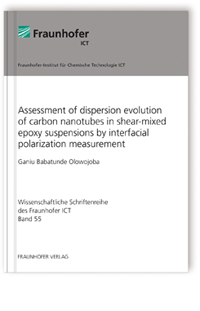 Inhalt
Owing to their remarkable properties, carbon nanotubes (CNTs) hold a huge potential as fillers in the production of multifunctional composites for many applications. However, their tendency to agglomerate as well as their chemically inert surface makes the task of dispersion very challenging. In spite of the immense effort aimed at understanding CNT dispersions and its implication for the properties of nanocomposites and suspensions, very little progress has thus far been made in terms of correlating the microstructural morphology of nanocomposites to their properties. By measuring the extend of interfacial polarization in CNT/epoxy suspensions subjected to oscillatory shear flow in a rheometer, a novel measurement strategy for assessing the dispersion evolution of CNTs, during shear mixing in an epoxy resin with a three-roll mill, has been developed in this study. This allowed the influence of applied shear intensity, compatibility between CNT and matrix, initial CNT agglomerate morphology, as well as matrix viscosity on CNT dispersion quality during shear mixing to be investigated.