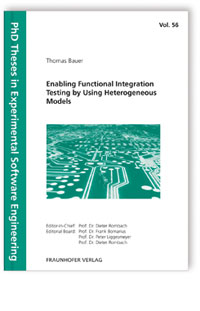 Inhalt
The integration test of software systems assures the quality and interoperability of composed sub-systems, which becomes highly relevant in the development of complex software applications. This thesis presents the novel model-based test approach ER!S for integration testing on the software level. The main result is a heterogeneous modeling notation, which covers both perspectives of integration testing: the high-level functional requirements of the subsystem and the functional implementation, as concrete component interactions. ER!S test models are created by an systematic construction and analysis approach. Stepwise system assembly is supported according to an operation-oriented integration strategy. Test cases are generated from the test model using different coverage criteria. They focus on the detailed coverage of system operations considering the execution conditions, the operational composition, and the interaction patterns. The solution was evaluated in several feasibility studies, which showed its applicability.