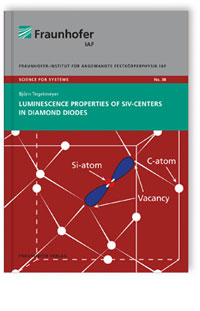 Inhalt
The silicon-vacancy center (SiV-center) is a promising candidate for quantum-physical applications due to its physical properties. It shows a narrowband emission and high photo-stability already at ambient conditions. Contrary to the well-known and extensively studied nitrogen-vacancy center, the physical properties of the SiV-center are not known well enough for actual applications. Especially the possibility of electrical excitation and the luminescence properties of different charge-states of the SiV-center are not sufficiently proven. The present work intends to narrow this gap. For that, electroluminescence experiments on pin- and Schottky-diodes were performed allowing to overcome the limits of optical excitation for future devices. Additionally, experiments for exploring the luminescence properties of the silicon-vacancy center at different surface terminations (hydrogen-, oxygen-, and fluorine-termination) were conducted. For a more detailed investigation of the SiV charge states, a two-dimensional Schottky-diode was fabricated from diamond, allowing to control the charge states actively and examine the resulting optical properties of the silicon-vacancy center.