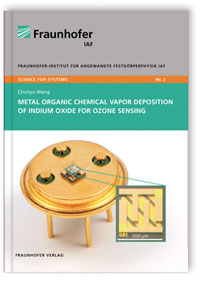 Inhalt
In this work, a novel type of ozone sensor based on the photoreduction and oxidation principles operating at room temperature was developed. MOCVD technique was used to grow highly textured bcc-In2O3 films and, for the first time, meta-stable rh-In2O3 films as well as In2O3 nanoparticles on sapphire or III-N substrates. Among them, the In2O3 nanostructures and In2O3 thin layers on AlN substrates are most suitable for the application of ozone sensing. The smallest ozone sensor integrated with LEDs was 300 µm * 300 µm. The lowest detectable ozone concentration was found to be ~ 13 ppb in air. In addition, this type of ozone sensor showed a good long-term stability and a low cross-sensitivity against other oxidizing gases. Thus, compact, portable, low-cost, low-energy consumption, environmental ozone sensors were developed, which are suitable for further integration in plastic packages, such as cellular phones and PDAs.