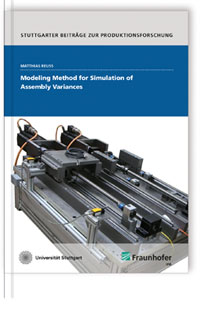 Inhalt
Exchangeability of machine tools requires identical results of identical machining operation. For estimating the behavior of machine tools, the interaction of electromechanic system and controller must be observed together. This allows to measure friction at start-up in serial production of machine tools and at the production plants of machine tool consumers without any additional measuring equipment. By measuring friction severe variances of the feed axes have been detected, which are mainly caused by assembly variances. Especially the alignments and preloads of bearings and ball screw have a severe influence. A test rig is used to identify components' friction behavior and to induce definite variations of assembly conditions. In order to improve the significance and to estimate the effect of assembly variances in detail, a modeling method based on multibody simulation has been developed and verified.