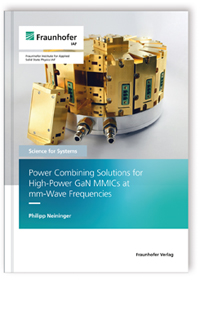 Inhalt
As higher and higher frequencies are employed in communication systems of the next generation, amplifiers that can deliver large power levels in these applications are crucial components. Conventionally, in the mm-wave frequency range, they are realized using vacuum tubes. However, due to their inherent advantages, solid-state based amplifiers (SSPAs) are an alternative of great interest. To that end, this thesis is concerned with the design of a broadband amplifier system based on gallium nitride (GaN) semiconductors. It consists of two parts, the first of which analyzes implementation methods for broadband amplifier integrated circuits with high output power. In the second part, a thorough comparison of several combiner topologies is presented with a focus on their suitability towards higher frequencies. Furthermore, a 16-way radial-line combiner system is developed which contains several novel components, yielding significant benefits in efficency and bandwidth. Using these concepts, a two-stage 16-way SSPA is assembled and characterized. It delivers an output power of nearly 100 W in most of the Ka band, and thus significantly advances the state of the art.