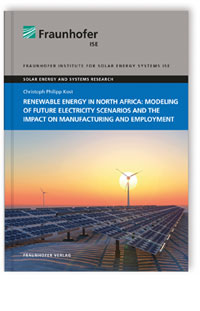 Inhalt
The transition of the North African electricity system towards renewable energy technologies is analyzed in this book. Large potentials of photovoltaics, concentrating solar power and onshore wind power in North Africa provide the opportunity to achieve a long-term shift from conventional power sources to a highly interconnected and sustainable electricity system based on renewable energy sources. A multi-dimensional analysis evaluates the economic and technical effects on the electricity market as well as the impact on manufacturing and employment caused by large deployment of renewable energy technologies. The integration of renewable energy in the electricity systems of Morocco, Algeria, Tunisia, Libya and Egypt is modeled in a linear optimization model (RESlion) which minimizes total system costs of the long-term expansion planning and the hourly generation dispatch problem. An additional focus of the analysis is set on the option to export electricity from North Africa to Southern European countries. For the analysis of the impact on local manufacturing of components and job creation in the renewable energy sector, a decision model, so called RETMD, is used.