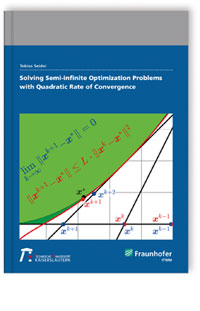 Inhalt
Semi-infinite programming can be used to model a large variety of complex optimization problems. Interesting applications include cutting and packing, or coverage problems. The simple description of such problems comes at a price: semi-infinite problems are often harder to solve than finite nonlinear problems. In this thesis we solve semi-infinite optimization problems using adaptive discretization methods having a quadratic rate of convergence. First, we investigate the classical Blankenship and Falk algorithm. We present an example which shows that quadratic convergence is not possible for a minimum of order higher than one. Motivated by this example we suggest a new adaptive discretization algorithm with guaranteed quadratic convergence. This rate holds even for minima of order higher than one. We prove the Quadratic Convergence Theorem, which rigorously establishes quadratic convergence under mild regularity conditions and investigate further convergence properties.
We compare the Blankenship and Falk algorithm to our new method by considering a series of numerical examples. In these examples, our new method outperforms the Blankenship and Falk algorithm.