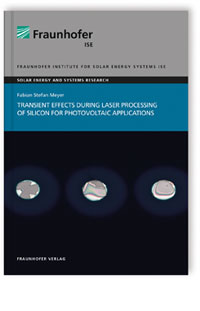 Inhalt
Intense laser pulses deliver fine doses of highly concentrated energy to modify solid targets in an exceptionally well controllable manner. Two applications of this are treated herein: “laser annealing” as an approach to transfer amorphous silicon into the crystalline state and “laser ablation” to create local openings in dielectric layers for subsequent contacting. Both can be used in manufacturing of silicon solar cells as a cost-effective and environmentally friendly alternative to thermal and chemical processing. This work presents implementations of the pump-probe approach which enable the observation of the surface during and shortly after the arrival of a laser pulse. With an automated opto-mechanical setup concurrent physical processes happening in the material are made visible on the femtosecond to nanosecond scale. Using micro- and nano-characterization, modeling and simulations, this work shows how the absorption of intense laser pulses leads to phase transformations and material removal. It demonstrates that time-resolved observations are essential to investigate the origin of undesired side-effects, such as laser induced damage or incomplete layer removal.