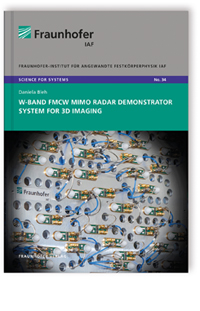 Inhalt
One of the most dangerous situations when flying a helicopter is landing over dry sand or powder snow. The rotors swirl particles creating a dense cloud. With optical methods navigating through this cloud is impossible but for millimetre waves it becomes almost transparent. As a consequence millimetre waves are an outstanding choice for the development of imaging systems that can be used as a landing aid. The aim of this work is the 3D imaging of static scenes with a large field of view, good resolution and high dynamics. In this thesis a demonstrator system is presented, which is based on the MIMO principle and works with FMCW radar modules in the millimetre wavelength range. The set-up of the demonstrator system is explained and the hardware components are described. An algorithm for image reconstruction is presented as well as a calibration routine. An optimized antenne aperture is determined that enables unambiguous imaging of the half-space in front of the aperture with good resolution and low side lobes. Various measurements illustrate three-dimensional imaging capabilities and show long-range operation. In addition, the data acquisition rate is determined.