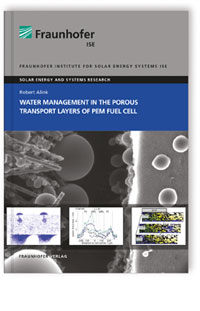 Inhalt
In this thesis, water management in Polymer Electrolyte Membrane (PEM) fuel cells is analyzed. To find strategies for minimizing the major loss mechanisms that occur due to flooding, a focus is put on liquid water transport in the porous transport layer (PTL).
A novel method to visualize the liquid water percolation in the PTLs using an environmental scanning electron microscope (ESEM) is developed. Compared to existing visualization techniques, the method enables to phenomenologically investigate the liquid water transport mechanisms with low experimental cost and high temporal and spatial resolution.
The water transport mechanisms are investigated by analyzing the impact of different local PTL modifications on the water management by applying ESEM and synchrotron imaging, in-situ performance characterization and water balancing. Different indications on a beneficial drainage effect are found, which results in a reduced saturation in the vicinity of the modifications in the fibrous substrate (FS). Further findings indicate that interfacial water between the microporous layer (MPL) and the catalyst layer is the most decisive for the success of the perforation approach but also for the performance with unmodified PTLs.
The identified transport mechanisms are implemented in a 3-dimensional fuel cell model containing the thermodynamic processes that are most relevant for 2-phase water analysis. As a module, a novel approach to model the liquid water percolation is developed. The liquid water distribution and movement is described by considering all stable water paths within the FS. By determining the transitions between the stable paths, a network is generated which is used as a basis for a fast and computationally inexpensive calculation of the liquid water percolation. After the network generation step, liquid water can either be injected through one of the PTL boundaries or directly into the FS bulk e.g. as by condensation.
The discrete water path network model is coupled with a continuum model including the fuel cell thermodynamic processes and an iterative coupling algorithm is developed to match the input and output of the two model modules. Using the model, the ad- and desorption rate of the catalyst layer and the in-plane liquid water permeability close to the catalyst layer/PTL interface are identified as important parameters for the overall fuel cell performance. A major contributor to the beneficial effects of the MPL is found to be the altered processes close to the CCL/ PTL interface.